Through the Wrong Door - complementary chapter to "A Ripple in Time". 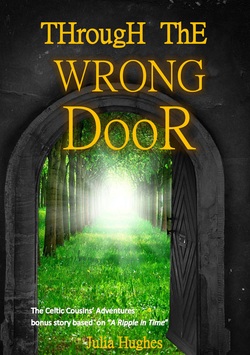 There was one solitary window, placed high on the cell wall. Judging by the angle of the sunlight shining through it, Rhyllann calculated it was almost noon. From outside, he could hear a rabble rousing crowd gathering, interspersed with shouting. The shouts became louder, and sounded more organised. Rhyllann began counting in an attempt to blot out the noise and the thought that within an hour, he would cease to exist. He paced as he counted, five strides from wall to wall, five strides from door to door.

One door opened onto a corridor, part of the labyrinth running beneath the Old Bailey Criminal Courts. The other led to a sunken courtyard. At mid-day, it would open, and he would be escorted outside, to the gallows waiting for him.

I hope I don’t faint walking up the steps to the noose, and I hope my neck snaps cleanly. Rhyllann hadn’t planned to die so young, like many soldiers, he felt invincible in battle. During his trial, he felt he’d been living somebody else’s life, and even though this felt like somebody else’s death, he wanted to meet it bravely.

The chief clerk of the Old Bailey had informed Rhyllann with a satisfied smirk that the viewing benches for his execution had been oversubscribed by ten thousand.

Then he had asked if Rhyllann wanted any "spiritual comfort". For a second, Rhyllann thought he was being offered a stiff drink. Then he shook his head, and said

A memory of his cousin Wren flashed through his mind, interrupting his pacing, and Rhyllann almost sobbed out loud. Wren, who had died over five years ago, and far too young, would have laughed at the irony. The war in Europe, started in 1914 and now fast approaching its centenary had claimed millions of lives. But this wasn’t enough for the British Empire. The country which Rhyllann had sworn to defend with his life had convicted him as a coward. The penalty was death.

The voices outside were synchronised now. They shouted his name over and over. Entombed in the shouting, Rhyllann heard what he’d been subconsciously listening for and dreading: the unemotional clang of a bell. Others must have heard it too; the chants trailed off. The second clang was clearly audible; the third rang out into silence. By the time the bells of Old Bailey had finished their solemn announcement of mid-day, Rhyllann felt as though a life-time had passed. My life-time has passed, he thought.

Though he was no longer permitted to wear his regiment’s uniform, he squared his shoulders, lifted his chin, and kept his eyes fixed on the courtyard door. Someone was speaking through a loud hailer. The magnified echoes vibrated through the dungeon’s walls, but the speech was distorted and Rhyllann couldn’t understand a word. The crowd could though, and cheered when the announcer finished whatever he was announcing. Probably free beer to celebrate the hanging. Rhyllann thought, and squared his shoulders again, in an effort to appear alert and unafraid. Still the courtyard door remained shut. Instead, hearing the door behind him open, the one that led to freedom, Rhyllann spun around. He found himself staring into the blue eyes of the last person he expected to see. A person he hadn’t seen in over five years.

When Rhyllann finally stopped shaking, he was escorted back to the court. Only his own barrister – barely out of university – the Crown’s barrister, the judge and a retired police officer were present. Rhyllann learned that the crowd hadn’t been jeering, they’d been cheering.

Fearing civil disobedience would spread over the Irish Sea and then throughout the Empire, his honour Judge Thornton hurriedly consulted his peers. Now the wizened old man praised Rhyllann for having the courage to stand up to his commanding officer. With a rap of his gavel, the judge pronounced Rhyllann as misguided, but an innocent and therefore, a free man. Crombie had already resigned from the police. Judge Thornton rattled through the Riot Act, and Crombie accepted his own punishment with a shrug of his shoulders.

Afterwards, Rhyllann stood for the drinks in “The Cuckoo’s Spit”. It seemed the least he could do.

‘Thank you Crombie,’ he said for the twentieth time.

‘Mr. Crombie to you,’ Crombie said, before sinking his face into his pint of ale. When he came up for air, he said, ‘Don’t keep thanking me. I let your cousin down, I wasn’t about to let you down.’

‘Won’t Mrs. Crombie be cross?’ Rhyllann asked, not wanting to talk about Wren, or the circumstances surrounding his death.

‘But what will you do now?’

Crombie drained the last of his ale, swiped a hand across his mouth, and shrugged his arms through his old leather jacket. The pockets bulged, completely ruining the hemline. Not for the first time Rhyllann tried, and failed to imagine Crombie with a brief case.

‘I gave all those newspaper wallahs a world exclusive.’ The crow’s feet around Crombie’s eyes wrinkled as he grimaced, and added: ‘One or two of them owe me. Or maybe I’ll get a private investigator’s license. Whatever, I’m glad I’ve got daughters. At least there’s no chance of them getting called up for National Service.’

‘I would have joined up anyway.’ Rhyllann’s thoughts turned to his own future, which looked bleak. ‘I would have liked the Navy, but …’ his voice trailed away. Some nights, he dreamed so vividly that he woke up on sheets drenched with sweat. In those dreams, he was dressed in his smartest suit, dancing on the deck of a magnificent ship which was slowly sinking, while the orchestra played on …

Crombie pushed away from the table and stood up, holding out his hand for Rhyllann to shake. ‘I said, a little bird told me you’re going to be re-instated with full honours, and even promoted. So try to look surprised, and try to stay out of trouble.’

I wonder why Crombie blames himself for Wren’s death, when it was all my fault. I was the eldest, and I should have known better than to listen to Wren’s crazy ideas. If anyone’s to blame, it’s me.  Rhyllann sighed, finished his own pint, and muttered again ‘Thank you Crombie, I promise I’ll stay out of trouble.’

Over the next few months, Rhyllann tried. The army compensated him, and with his back pay, Rhyllann purchased a sporty little Stag in British Racing Green. He was promoted and now introduced himself as Captain Jones. Blessed with a well toned six foot two body and dark Hispanic good looks, Rhyllann had never been short of girlfriends, but now apparently his chocolate brown eyes were even more "soulful". He threw himself into the London party scene, relishing wine, women and songs.

But he had no regiment, and it was clear he’d never be allowed on the battlefields again. He could just hear the whispers at Head Quarters: “Can’t be trusted to follow orders.” But he accepted the pen-pushing job given to him at the MOD, and told himself to be grateful he still had a life – a life full of boredom.

Unsurprisingly, his dreams became ever more fantastical. In these dreams, Wren lived. Better still, he insisted Rhyllann hadn’t failed him. Rhyllann always enjoyed the dream up to this point, even though Wren went into full blown geek-talk – rattling on about alternative histories and timelines. Sometimes Rhyllann managed to wake himself at exactly the right moment. Just after a ghostly Wren insisted Rhyllann had saved him, and could still save him – and just before Wren plunged his world into chaos – again.